Space reporter Miles O’Brien guides you through the first human mission to Mars — a daring 1000-day mission to fly an international crew to the red planet and return them safely to Earth. Many challenges will have to be met in order for the crew to succeed and unlock the secrets of the new World! 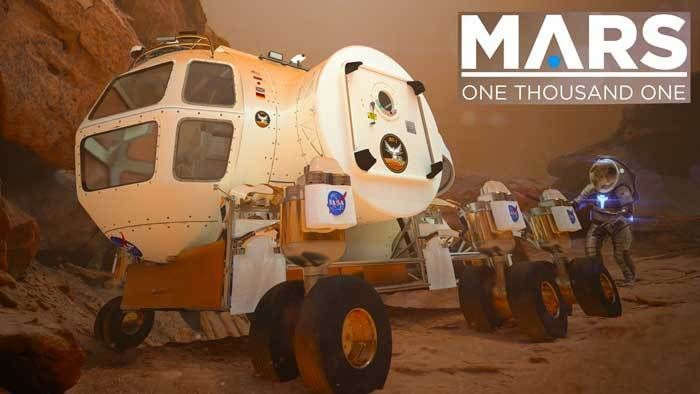 MARS One Thousand One begins with a retrospective by veteran space reporter Miles O’Brien. He’s familiar to Americans as the reporter who covered so many missions for CNN and has gone on to serve as an independent science correspondent for PBS NewsHour. In this movie, he plays himself from a future perspective. He introduces us to the concepts of the Mars IRIS 1 mission and its 1001-day voyage. Director Robin Sip and his team have painstakingly recreated a mission control, complete with launch team, and Miles reports on the mission’s progress from his anchor desk throughout the trip.

The launch is flawless and the mission gets underway. The crew of IRIS 1 faces a few dangers along the way, including a solar coronal mass ejection that threatens their safety. Interior scenes show us how the team lives and works together, braving the dangers and anticipating the Mars landing to come.

Once on Mars, we see the teamwork on the surface, exploring the landscape, looking for water, and retrieving rocks in a search for the history of water on Mars. In an especially poignant moment, one explorer visits a spacecraft that she dreamed of watching during her childhood. The show has several such moments that tug at the heartstrings, and many others that explain to the audience just what Mars is like and what science the team is doing to understand its ancient past. All too soon, the Mars portion of the mission is over and the team heads back to Earth for a triumphant landing.

MARS One Thousand One is a visually beautiful show that brings the reality of Mars exploration to audiences. It’s set just far enough in the future to seem real, but with crafty science-fictional touches that tell us, it’s still a ways in the future. It tells a story that we all hope to see and hear in our lifetimes: a trip to the Red Planet.

The runtime is approximately 30 minutes.

Our immersive planetarium and full-dome theater is one of the largest and most powerful virtual reality experiences in the world!

The all-digital, JetBlue Sky Theater Planetarium — with its state-of-the-art high-resolution projection and sound system provides an exciting, entertaining and unparalleled experience that will take you on journeys you’ve only imagined.

We ask that all visitors over 2 years of age wear face coverings, even if vaccinated.

We will be closed on Saturday, Jan 29 due to the snowstorm.