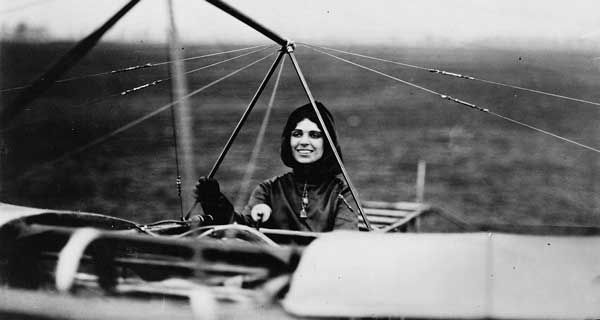 Although most aviation buffs know that Quimby was the first American woman to earn a pilot's license and the first woman to make a solo flight across the English Channel, little else is known about her or her short career as an aviator. Perhaps her life remains a mystery because she publicly flew for less than a year and she intentionally created an aura of intrigue about her early life.

"In my opinion, there is no reason why the aeroplane should not open up a fruitful occupation for women."

(Courtesy of the FAA)

Born in Coldwater, Michigan, in 1875, Quimby led people to believe she was born in Arroya Grande, California, in 1874. Although she did grow up in Arroya Grande in a poor rural family, many presumed her to be from a wealthy family and well-educated in the United States and France. Beautiful and well-poised, Quimby aptly carried out the charade. Encouraged by her mother to believe that she could succeed in almost any endeavor, she relied on her talents and wit to accomplish what few women of her time even dared to dream about. An anomaly for her time, Quimby willingly disregarded societal convention, opting for a career rather than marriage.

Harriet Quimby's public life began in 1902, when she began writing for the San Francisco Dramatic Review and also contributed to the Sunday editions of the San Francisco Chronicle and San Francisco Call. Pursuing a career in a field few women entered at that time, she stood out among her peers for a variety of reasons. For example, according to one biographer, while working in California, she was one of the first journalists anywhere to use a typewriter. She also often could be seen driving her yellow car around town, a unique sight since automobiles were still a rarity at the turn of the century. In 1903, she moved to New York where she joined the staff of Leslie's Illustrated Weekly as a drama critic and editor of the women's page. Unwilling to remain content with these tasks, the ambitious Quimby soon began writing feature articles for the magazine.

The young journalist's love of aviation was born in October 1910, when she attended an international aviation meet at Belmont Park, New York. She quickly became intrigued by both the airplanes and by John Moisant, the pilot who successfully won the race, beating his competition in the course around the Statue of Liberty. Quimby asked Moisant to teach her to fly. However, before she could begin lessons at the Moisant Aviation School on Long Island, John Moisant died when his plane crashed at an air meet in New Orleans. Undaunted, Quimby began lessons with John's brother Alfred. While at the school, she met and quickly befriended fellow student and Moisant sister, Matilde.

Quimby quickly discovered a passion for flying, and on August 2, 1911, after four months and thirty-three lessons, she applied for and won her pilot's license by performing two test flights. This made her the first American woman and the second female ever to receive a pilot's license from the Federation Aeronautique Internationale in France, which had begun offering licenses through the Aero Club of America. Matilde Moisant becomes the second American woman to earn such a license.

With license in hand, the "Dresden China Aviatrix" or "China Doll," as the press dubbed her because of her petite stature and fair skin, moved to capitalize on her new notoriety. Americans loved flying, and pilots could earn as much as $1,000 per performance, and prize money for a race could go as high as $10,000 or more. Quimby joined the Moisant International Aviators, an exhibition team, and made her professional debut, earning $1,500, in a night flight over Staten Island before a crowd of almost 20,000 spectators. As one of the country's few female pilots, she capitalized on her femininity by wearing trousers tucked into high lace boots accentuated by a plum-colored satin blouse, necklace, and antique bracelet. She drew crowds whenever she competed in cross-country meets and races. As part of the exhibition team, she showcased her talents around the United States and even went to Mexico City at the end of 1911 to participate in aviation activities held in honor of the inauguration of President Francisco Madero.

While touring with the airshow, she continued writing for Leslie's and recounted her adventures in a series of articles. Her personal reports discussed topics such as how she learned to fly and earned her pilot's license, and on the dangers of flying. Totally committed to her new passion, the dedicated journalist and aviator avidly promoted the economic potential of commercial aviation and touted flying as an ideal sport for women. Hoping to earn a global reputation with its incumbent fame and fortune, Quimby decided to attempt a channel crossing from England to France in late 1911. The feat had been first accomplished by Louis Bleriot in 1909 and subsequently by other pilots, but never by a woman. In March 1912 she sailed for England to begin preparations for her daring flight. English pilot Gustav Hamel helped her plan the trip. In thickening fog on the morning of April 16, 1912, the adventuresome pilot began her flight from Dover to Calais in a Bleriot monoplane. As she later recounted, "in an instant, I was beyond the cliff and over the Channel." As visibility decreased in the dense fog, Quimby recalled, "I could not see ahead of me at all, nor could I see the water below . . . there was only one thing for me to do, and that was to keep my eyes fixed on my compass" – a compass Hamel had recently taught her how to use. Quimby successfully crossed the channel, landing at Hardelot, approximately 25 miles south of her original destination. Her hopes for front-page headlines never materialized, and her achievement went largely unnoticed in the next days' papers. Quimby's daring feat had been overshadowed in the press by the sinking of the Titanic two days earlier.

Despite the disappointment that worldwide fame had eluded her, Quimby loved to fly and continued competing in air meets. Unfortunately, her career was short-lived. On July 1, 1912, less than three months after her channel crossing, she made her tragic last flight. While performing at the Harvard-Boston aviation meet in her new 70-horsepower Bleriot monoplane, Quimby lost control of the aircraft. Both she and a passenger were thrown out of the plane, and, in front of horrified spectators, they plummeted to their death in the shallow waters of the Boston harbor.

Not until almost eighty years after her death did Harriet Quimby receive the kind of accolades she had hoped for after her channel crossing. On April 28, 1991, the United States Post Office issued a commemorative stamp honoring her contributions to aviation. The 50 cent airmail stamp features a picture of the aviator, dressed in her purple satin blouse, superimposed over her Bleriot monoplane. The stamp simply states "Harriet Quimby: Pioneer Pilot."