Grumman's Cougar, an advanced design for its time, was evolved from the earlier straight-wing F9F Panther. The Cougar was the Navy's first swept-wing jet which allowed for much higher speeds. It first flew in 1951 and was designed in haste to provide the Navy with a weapon to combat the excellent MIG-15's being encountered in Korea. Cougars were armed with four 20mm cannons and rockets and were fitted with dive brakes under the fuselage which could be extended to slow the plane in flight during bombing runs or for carrier landings. A total of 1988 were built, some remaining in service until 1974. 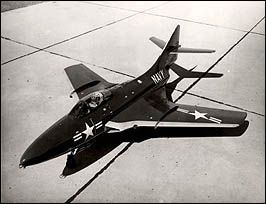