In November 1967, with the Space Age barely 10 years old, NASA was about to take one giant leap forward: the first flight of the Saturn 5 Moon rocket. 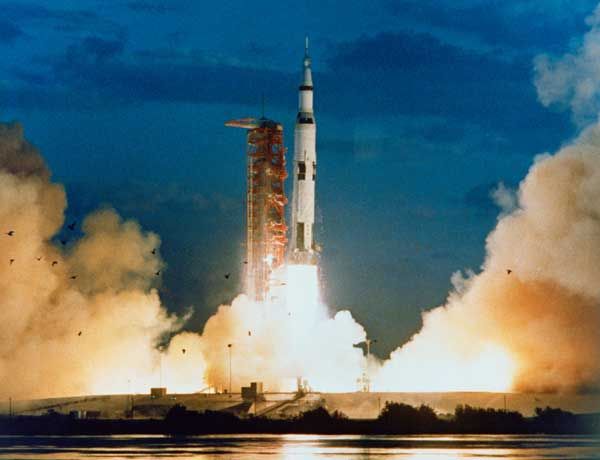 Launch of Apollo 4 atop the first Saturn 5 Moon rocket.

The Saturn V was a rocket NASA built to send people to the moon. A Heavy Lift Vehicle, it was the most powerful rocket that had ever flown successfully.

The Saturn V was used in the Apollo program in the 1960s and 1970s and was also used to launch the Skylab space station.

The Saturn V rocket was 363 feet tall, about the height of a 36-story building, and 60 feet taller than the Statue of Liberty. Fully fueled for liftoff, the Saturn V weighed 6.2 million pounds, the weight of about 400 elephants. The rocket generated 34.5 million newtons (7.6 million pounds) of thrust at launch, creating more power than 85 Hoover Dams. A car that gets 30 miles to the gallon could drive around the world around 800 times with the amount of fuel the Saturn V used for a lunar landing mission. It could launch about 130 tons into Earth orbit. That's about as much weight as 10 school buses. The Saturn V could launch about 50 tons to the moon. That's about the same as four school buses.

The Saturn V was developed at NASA's Marshall Space Flight Center in Huntsville, Alabama and was one of three types of Saturn rockets NASA built. Two smaller rockets, the Saturn I (1) and IB (1b), were used to launch humans into Earth orbit. The Saturn V sent them beyond Earth orbit to the moon.

The first Saturn V was launched in 1967 with Apollo 4. Apollo 6 followed in 1968. Both of these rockets were launched without crews. These launches tested the Saturn V rocket.

The last Saturn V was launched in 1973, without a crew. It was used to launch the Skylab space station into Earth orbit.

"I believe that this nation should commit itself to achieving the goal, before the decade is out, of landing a man on the moon and returning him safely to Earth."
~ President John F. Kennedy

Apollo on Exhibit at the Cradle of Aviation Museum

Visit our Countdown to Apollo at 50 homepage for information about exciting events and celebrations. 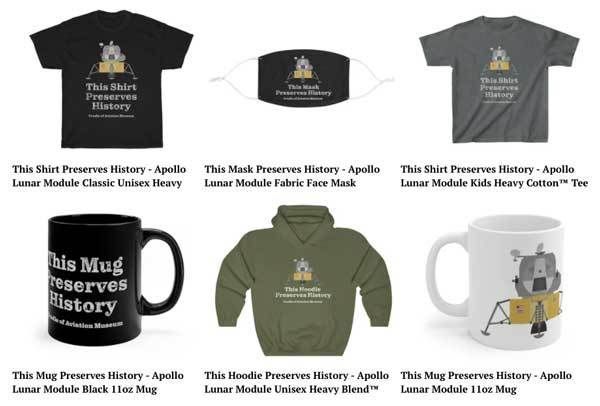 Support our Education and Preservation Programs with the purchase of a t-shirt, mug, hoodie or face mask. 50% of your purchase is tax-deductible and shipping is free!

Support our Education and Preservation Programs with the purchase of a t-shirt, mug, hoodie or face mask. 50% of your purchase is tax-deductible and shipping is free!