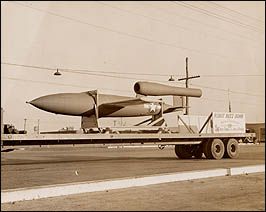 Beginning in 1944, Germany began launching thousands of unmanned flying bombs, V-1's, at England from sites in France. At the time the U.S.Army was interested in starting a missile program, so an unexploded V-1 was sent to America for study. In September, 1944, Republic was awarded a contract to build exact duplicates of these V-1's, and in exactly two months time, the first operational JB-2's (Jet Bomb Model 2), rolled off their assembly lines. In all, some 1200 JB-2's were built by Republic, as well as several other contractors. Republic JB-2's were the first U.S. guided missiles, as well as the first to be launched from submarines. Able to carry a ton of high explosive, they were intended to be launched from ships during the planned invasion of Japan.