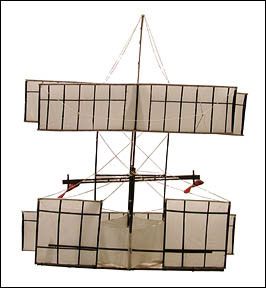 Before the advent of the airplane, and thus the model airplane, in the 19th and early 20th centuries kite flying was popular on Long Island. This is typified by the large homebuilt kite made by young Nicholas Timmons of South Ozone Park, Queens in 1906. The tandem biplane kite may have been modeled after a Langley design and it attracted considerable attention when it was flown at the time as this was before aircraft were seen. The propellers were unpowered and merely turned in the breeze for effect. This is the oldest flying machine in the museum's collection.