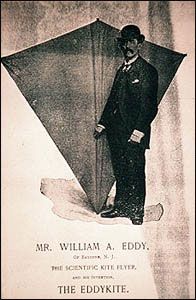 William Eddy, a journalist from New Jersey, contributed a great deal to western kite development and he made extensive experiments raising photographic and meteorological equipment. In the 1890's, Eddy developed an efficient, stable, cruciform-shaped kite, able to be flown without a tail. By using a flexible crosspiece (spar), the kite would bow in the wind thus acting like a ship's keel in water. The loose cover would also billow upwards, acting to some extent as an airfoil, giving additional lift.