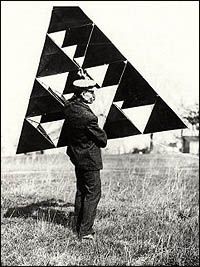 Alexander Graham Bell, inventor of the telephone, also experimented with aeronautics beginning in the 1890s. While living in Nova Scotia, Bell embarked on a program of kite tests aimed towards establishing the most stable form of kite capable of carrying a man and an engine. He decided upon the tetrahedral cell kite, a structure found to possess great lift as well as strength. In 1907, a huge tetrahedral kite lifted a man to 200 feet while towed behind a boat, however a powered version of the kite proved unsuccessful. Nonetheless, Bell's kite experimentation led him to other more conventional designs which eventually resulted in a successful powered aircraft. 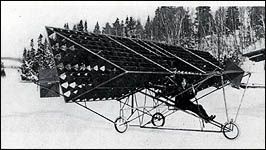