At the end of World War Two Republic began building the Seabee, a civilian amphibian, for what was seen as a booming market for new civil aircraft. The plane was designed to be built quickly and cheaply, and Republic thought it would be successful as there was no low-priced amphibian on the market. Originally priced at $3995, money was saved by using a stiffened airframe with few internal parts, only 450 in all. The Seabee was able to hold four and it was large and comfortable. However the unrealistic original price soon escalated to $6000 which was beyond the reach of most returning veterans. In 1948 the last of 1076 Seabees was built. In spite of failing commercially, the Seabee was a safe and rugged aircraft and many are still flying. 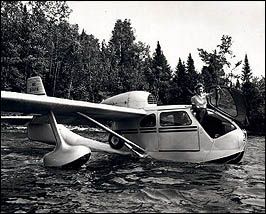 Side view of the Seabee fishing