Variable Pitch
by Jim Reddig, as told to Hugh Jones 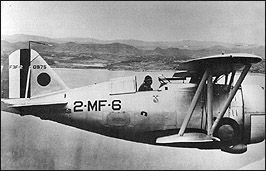 EAA Chapter Chapter 44 in Rochester, New York had the good fortune to have Slim Reddig as one of its members. A veteran of the early days of aviation, his engineering expertise made him one of the Golden Age of Aviation's best known designers. A shining example of his work is the classic Fleetwings Seabird amphibian. Jim was an active member of Chapter 44, and Hugh Jones and fellow members recognized what a treasure they had in their midst. Jim passed away in 1994.

In the mid-30s the navy was supporting development of three types of variable-pitch propeller: the Hamilton-Standard hydraulic controlled system, the Curtis Electric propeller, and the SMITH propeller that was operated entirely mechanically. The pilot had a manually operated control in the cockpit by which, through mechanism, he could vary the pitch of his propeller blades. Early Grumman biplane fighters joining the fleet were equipped with SMITH propellers. Remember those pregnant looking fat-bellied airplanes with retractable landing gear? And one of these, taking off from an aircraft carrier out of San Diego suffered loss of power on launch and went down into the sea directly ahead of the oncoming carrier. They had the good fortune to be able to get a line to the floating aircraft; legend leaves some doubt that the pilot even got his feet wet. The airplane was promptly hosed down with fresh water and, brought ashore, was soon packaged onto a railroad car and shipped to the Naval Aircraft Factory at Philadelphia Navy Yard for cleaning, repair and refurbishment, inspection, flight test and return to the fleet. This included complete teardown examination of the SMITH propeller and re-assembly with the blades carefully reset to their proper pitch.

The reassembled airplane was test flown at Mustin Field, inspected and signed off for return to San Diego. While the assigned Navy ferry pilot had never flown one of the exciting, new Grumman fighters, no one seemed to have felt concern in the matter. Wa-a-ay off schedule, he staggered into the Great Lakes Naval Air Training station in Chicago and plunked the thing down.

Everybody was saying, 'Where the hell have you been,' etc. And he says, 'Guys, this is the first Grumman I've ever flown, and if this is the 'GREAT Grumman' I've been hearing so much about-it stinks.' "Well, now, Ensign, what's the trouble?" 'It won't take off, it won't climb, it's got no ceiling, it runs hot and it vibrates like hell.'

"Well, obviously, you don't know how to fly a Grumman, 'cause that's a great airplane. You stand down and get the Lieutenant here to take it onto the West Coast." So again, way behind schedule, this Lieutenant makes it on into San Diego, but he has the look of being wrung out when he checks in. And he says, 'Guys, that airplane is all wrong. I have had it checked at five airfields on the way out here. TWA mechanics were good enough to come over and they went over it. And I've been in and out of it and there's something definitely wrong. It stinks! I had to land on the road and taxi across the Rocky Mountains! It didn't have enough ceiling to get over!'

They turned to some old aviation chief there and said, "Go look at the guy's airplane." He's back in 10 minutes, lit up like a lamp and he says, "Excuse me Lieutenant , you said you checked that airplane?"

"If I'm not asking too much Lieu- tenant," he says, "will you come out and look at the airplane with me?" They go out and the chief says, "Just look at it."

"Lieutenant, will you please step over and pull the engine through?"

The minute he put his hands on the propeller, he lit up! He knew! His hands were curled over the rounded leading edge of the propeller! The SMITH was perhaps the only propeller in history where you could get the blades in backwards! The pitch of the blades had been set accurately at Philadelphia, on the big steel surface plates with big protractors and everything, but they were 180 degrees around!

And this thing had flown across the continent with the sharp trailing edge plowing ahead and the rounded part on the back. Of course, in the Navy, every incident gets written down on a piece of paper. The form was known as a Trouble Report. Roy (Grumman) had this thing, this Trouble Report saying, 'Propeller blades in backwards' framed and displayed for many years. His wonderful new airplane had just crossed the country with the propeller blades on backwards!