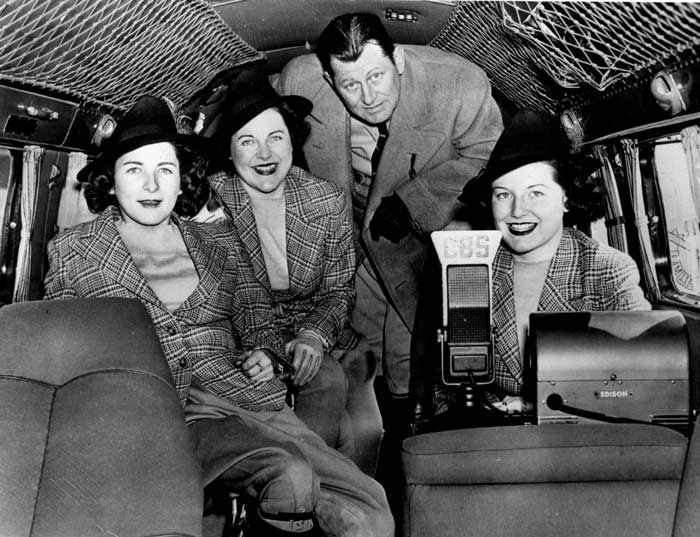 The 20-year period between World War I and World War II, commonly referred to as the ‘Golden Age of Aviation’, was an exhilarating era when manned flight ‘came of age’. Between 1919 and 1929, aviation was still in its infancy, but with technological advances, the design and construction of ‘aeroplanes’ progressed from slow, wood-framed and fabric covered biplanes to fast, more efficient and powerful metal monoplanes.

As the technology of aviation evolved, the pioneers of flight competed for speed, endurance, distance and altitude records, making monumental contributions to the progression of aviation in both the military and civilian arenas. One of the greatest challenges after World War One was not only to demonstrate the capabilities of the airplane, but to promote aviation to the public and have them embrace it as a safe, viable means of transportation

In the 1920s aviation reached its pinnacle as a form of entertainment as barnstorming pilots demonstrated their proficiency in the air and generated enthusiasm toward this marvelous, new and super-fast technology. Making their way over cities and into rural America, barnstormers dropped leaflets from their open-cockpit airplanes, offering rides while stunt flying over towns and wide-open farmland in order to capture the imagination of people who had never seen an airplane before.

Toward the end of the 1920s, as flying became more regulated by the U.S. Government, so came the decline of barnstorming. Consequently, with the approach of the 1930s, epic flight attempts across the Atlantic, Pacific and continents were to follow and the valiant men and women who undertook and accomplished these feats were perceived as heroic, often achieving celebrity status. 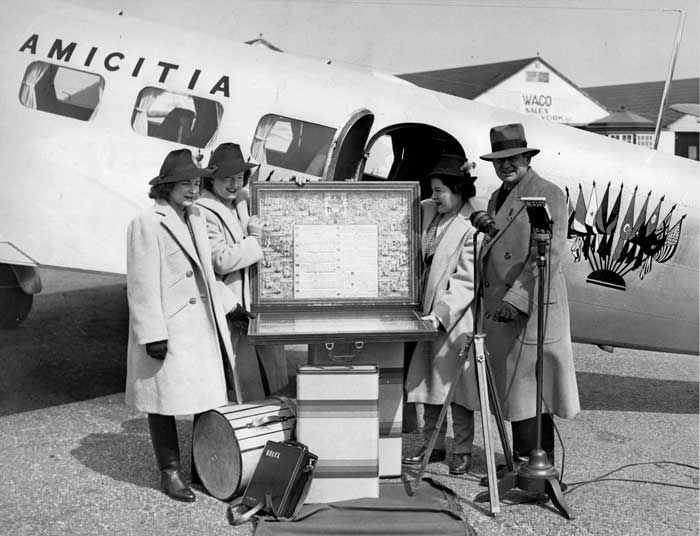 Of the many aviators who gained fame, one of the lesser-known names, today, is not that of an individual, but of a family, known as ‘’The Flying Hutchinsons’’. In 1931, aviator, Col. George R. Hutchinson, with his wife, Blanche, their daughters Kathryn and Janet Lee and their pet lion cub mascot, Governor, made headlines when they flew to every of the 48 state capitals in the United States. The family worked together on flights as a cohesive unit, assisting with navigation, radio and weather reports while promoting aviation and proving that flying was a safe and reliable form of transportation. When the news media commented on the dangers of the Hutchinsons flying with their children, George and Blanche’s response was that their daughters were safer in the air than on city streets. 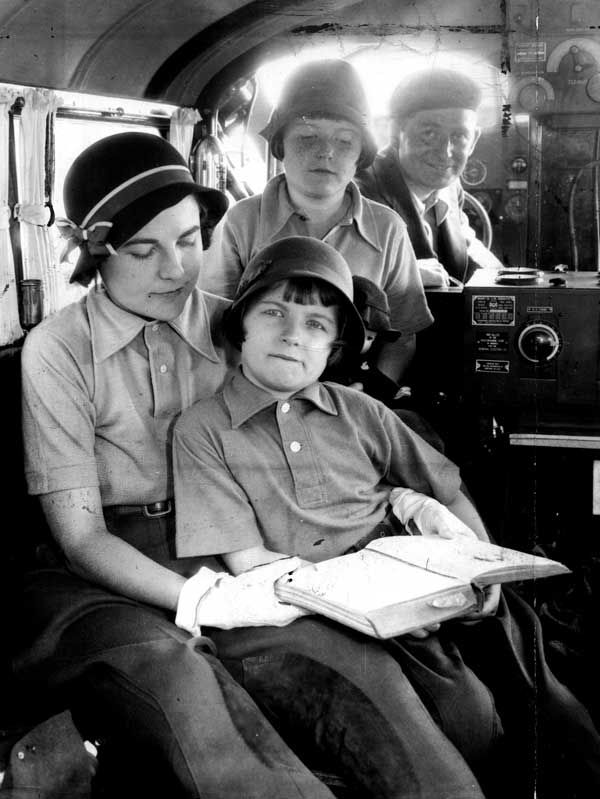 The following year in 1932, the Hutchinsons attempted to become the first family to fly across the Atlantic in a Sikorsky amphibian, but they were forced to make an emergency landing off the coast of Greenland and were washed ashore where they spent several days awaiting rescue by a passing trawler. Later, their adventures were documented in two books, ‘’Flying the States” and “The Flying Family In Greenland” and as the Hutchinsons popularity grew, it earned them an appearance on a cereal box, a jigsaw puzzle, and engagements on NBC and CBS Radio programs where their air travels were dramatized. Received by Presidents Hoover and Franklin D. Roosevelt, the Hutchinsons knew many aviation pioneers in their circle such as Charles Lindbergh, Eddie Rickenbacker and Amelia Earhart.

In the spring of 1939 and the eve of World War Two, George and Blanche Hutchinson, with Kathryn, now age 16 and Janet Lee, 13, departed Roosevelt Field, Long Island for a publicized goodwill flight around-the-world in a Lockheed Electra, named Amicitia (Friendship). The Amicitia carried a scroll with a message of peace to the ’68 nations of the world on the tour, which would bear the signatures of each nation’s leader. On the scroll was inscribed, “We the leaders of the nations of the earth, whose portraits and signatures are here assembled for the first time, proclaim our greeting and good wishes to all people in the fervent hope, that this document may serve to strengthen world fellowship, for the greater glory and welfare of the humankind.”

As the storm clouds of war gathered in Europe, the goodwill flight was abandoned after completing several stops in North America, Central and South America. Following the eventual declaration of war with the United States after the bombing of Pearl Harbor on December 7, 1941, Janet Lee Hutchinson, at age 18 became one of the youngest members of the WASP, Women Airforce Service Pilots, serving her country as a test, ferry and training pilot before the unit was disbanded in December of 1944.

At the end of the Second World War, the Hutchinsons settled in Ruxton, Maryland where the family led a quiet life operating a nursery school. Col. Hutchinson died in 1989 and Blanche, Kathryn and Janet Lee later moved to Ponte Vedra, Florida. On March 10, 2010, Janet Lee, the youngest member of the ‘Flying Family’, was among the nearly 200 surviving WASP who were able to travel to Washington, D.C. to receive the Congressional Gold Medal, the highest civilian honor bestowed by the United States Congress.