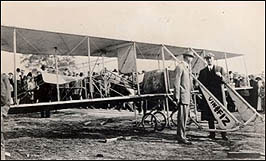 On September 17, 1911, Calbraith Rogers departed Sheepshead Bay, Brooklyn in an attempt to win a prize for the first transcontinental flight made in 30 days or less. Sponsored by a company promoting a new grape soda named "Vin Fiz", Rogers flew a Wright brothers Model B. Throughout his flight a train followed him carrying spare parts and mechanics. His flight required 70 landings for service stops and was interrupted by 15 crashes. He tried to navigate by following train tracks where possible. The difficulties of the flight were staggering, there were no airfields, no supplies, no instruments and no weather reports. In November, after 49 days and 82 flying hours, Rogers reached Pasadena, California. Though he failed to win the prize, Rogers determination won him the admiration of the American public and hinted at the future potential of the airplane. 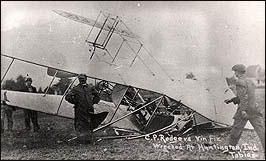 One of the many crashes along the way. 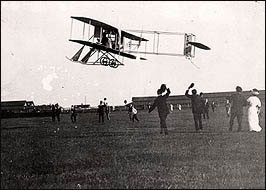 The Vin Fiz in flight. 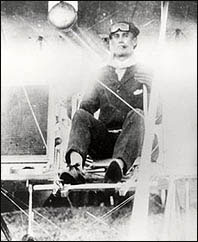