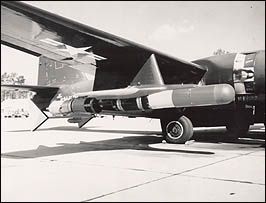 In 1946 Fairchild Guided Missiles was established in Wyandanch for the development of new types of military missiles. Their first product was the Petrel, a revolutionary new missile that was operational by 1951. The Petrel was an air-launched missile, and was designed for use against surface ships and submarines. It consisted of a Mk 13 torpedo fitted to a jet-powered airframe. The torpedo would shed its airframe at a predetermined range and enter the water as a normal homing torpedo. The Petrel provided patrol aircraft with an offensive capability against enemy ships and submarines from beyond the effective range of those ships defensive armament.