School districts can utilize the museum as a resource to maximize their student success through a Magnet Academy.

One partnership in particular is with the Westbury school district. In this program select high school students take an accelerated science curriculum that includes a physics-first model, mathematics, robotics, aeronautics, astronomy, and history.

While the students may benefit from the freedom in being away from the typical distractions of a large high school, it is clear that instead of being in just another classroom the students are in a learning laboratory. Using the museum as a classroom students’ have access to hands-on exhibits and artifacts while also being exposed to scientists, mathematicians, historians, aviators, and local leaders. Each component helps to spark intellectual curiosity and create motivational strategies that challenging science, technology, mathematics and history curricula. Among those experiences, students have learned about rocket propulsion through museum exhibits, conducted college-level Physics experiments through a partnership with Adelphi University, have met Tuskegee Airmen and African American Air Force Pilots, have met Retired U.S. Air Force Pilot and Astronaut Buzz Aldrin, and participated in a live space chat with Astronaut Tracy Caldwell Dyson just to site a few.

The Westbury program has seen remarkable success in boosting student achievement on New York State Regents Exams in Science and Math. In June 2009, a pilot group of 31 ninth-grade-students taking the Physics Regents Examination, 87 percent passed the rigorous test. As tenth-graders in 2010, 100 percent had passed the Chemistry Regents and 97 percent of students passing the Math B2 Regents. This group will be taking AP Biology this year. The next group, about thirty ninth-graders from the Class of 2013 has had 88 percent of test-takers pass the Physics Regents in 2010 and 96 percent of test-takers passed the Geometry Regents in 2010.

Beginning in the fall of 2011 Uniondale High School partnered with the museum in opening up academy programs at the Cradle of Aviation Museum and additional school districts are currently planning academy programs.

If your organization or school district is interested in finding out more about our Magnet Academies, please contact Catherine Gonzalez, Director of Education at 516-572-4028 or use the form below. 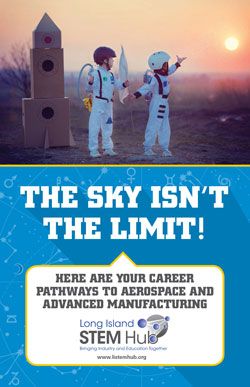 Long Island is full of opportunities for young men and women with big dreams and an interest in science, technology, engineering, and math (STEM) to become the next generation of innovators in the aerospace and advanced manufacturing fields. Use this guide to explore these fields, learn how you might fit in, and discover resources, camps, and even pre-professional internships designed to encourage your curiosity and launch your career!

This guide was produced by the Long Island STEM Hub and the Cradle of Aviation with generous support from The Long Island Community Foundation.