Grumman's only venture into the light-plane field was begun in 1943, as Leroy Grumman was searching for non-military products for the postwar period. Designed by Dayton T. Brown, designer of the Brewster Buffalo, the ‘Kitten' was a small two-place, an all-metal plane equipped with retractable landing gear. The pretty little plane, spot-welded aluminum throughout, bears a family resemblance to the Grumman Wildcat. First flown in 1944, it was a successful design in many respects superior to other light-planes of the period. However as the expansion of the postwar private-flier market never materialized, it was decided not to place the aircraft in production. Of the two kittens built, this is the sole survivor. 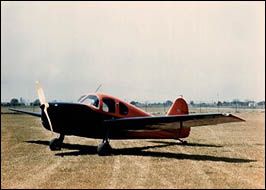