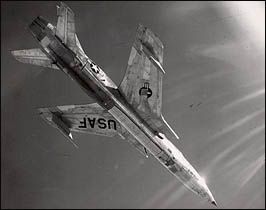 The F-105 evolved from a project begun in 1951 by Republic Aviation to develop an advanced long-range supersonic aircraft specifically for the delivery of nuclear weapons. The prototype first flew in 1955, and a first run of 75 F-105B's were built. Total F-105 production, ending in 1964, reached 833 aircraft, mostly ‘D' model all-weather fighter-bombers, and two-place ‘F' model electronic warfare aircraft. The F-105 was notable for it's large bomb bay and unique swept-forward engine inlets in the wing roots. The F-105 is still the largest single-engine, single-seat aircraft ever built. Top speed was a remarkable 1264 mph.

The F-105 fighter-bomber proved it's worth when it was pushed into service in Vietnam - as a tactical strike aircraft, a role it was never designed for - where climatic and combat conditions demonstrated its durability. In combat the aircraft was equipped with a 20mm Vulcan cannon in the nose (able to fire 6000 rounds per minute) and up to 16,750 pounds of bombs or rockets (Sidewinders, Bullpups or Shrikes) on external mounts. The "Thud", as it was nicknamed, quickly became the workhorse of the USAF, used for 75% of its strike missions in Vietnam. In Vietnam, the F-105's were used as bombers - the usual load carried exceeded by 50% the amount carried by a World War Two B-17. The attitudes of the Thunderchief's crews quickly changed from dislike to admiration as the plane revealed an ability to sustain heavy battle damage and still return home safely. It was particularly effective in Vietnam in the "Wild Weasel" role as a SAM (Surface-to-Air) missile site destroyer. In smashing railways, blowing up bridges, destroying steel mills and even tangling with Migs, the F-105 wrote itself into the pages of aviation history. On flights over North Vietnam, F-105's would face Migs, Surface-to-Air missiles, intense anti-aircraft flak and even automatic weapons fire. This was the most intense combat environment ever encountered in aviation history.

This F-105, an early ‘B' model, was never used in combat, however it served with the U.S.Air Force until 1972 at which time it was turned over to the New Jersey Air National Guard. Upon retirement from Guard duty in 1980 the aircraft was flown to Republic Airport (Farmingdale) and then trucked down Hempstead Turnpike to the museum. 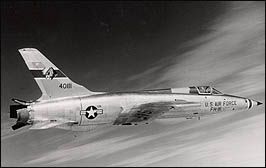