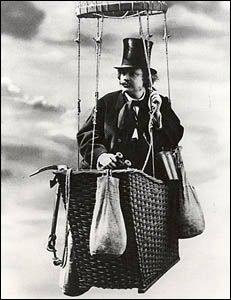 In the late 18th century, one of mankind's oldest dreams came true - he soared into the skies. It was in France, during the Scientific Revolution, in 1783 that the Montgolfier brothers built and flew the world's first hot-air balloon, Thus ballooning produced the first of the world's air pilots and flying now became both a sport and an experiment. By 1793 the first balloon flight occurred in America. However, these early aeronauts were frustrated in their attempts to control the course of their balloons - they simply drifted with the wind. All dreamed of the day when machines would be built that would be practical methods of travel from point to point.

The Cradle of Aviation Museum's balloon basket represents how a balloon and its aeronaut would have looked to someone on Long Island in the 19th century. Balloons then were made of woven fabric, coated with varnish in order to increase their resistance to rips and to slow the escape of gas. A rope netting covering the balloon distributed the weight of the basket, which hung from a suspension hoop. The balloon was inflated with hydrogen through an opening at its bottom, and once released it ascended until its weight was in equilibrium with the air around it. Sand was dropped to make the balloon rise higher, and gas was released through a valve to cause it to descend. This balloon basket, made of wicker for lightness, dates from the 1950s and was converted to resemble a 19th century basket.

"I hope these new mechanic meteors (balloons) will prove only playthings for the learned and the idle, and not be converted into new engines of destruction to the human race, as is so often the case of refinements or discoveries in science."
- Horace Walpole, 1790