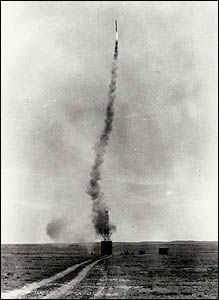 In the 1920's, Dr.Robert Goddard developed the world's first liquid fuel rockets. Charles Lindbergh read an account of his work and, impressed with the possibilities of the rocket, brought it to the attention of his friend, Harry Guggenheim of Sands Point. Soon Dr. Goddard received a grant from Guggenheim, which allowed him to continue his research at a time when the government thought of him as a "nut". After moving to New Mexico, Guggenheim grants financed Goddard's work until 1940. During that time he developed a reliable liquid fuel rocket engine, turbine fuel pump, gyroscopic control and parachute recovery. Thanks to Long Island funding, Goddard is the man behind every rocket that flies. This rocket is a full-scale replica of a Goddard A-series rocket. In the 1930's, A-series rockets flew at speeds of over 600 mph and to altitudes of about two miles. 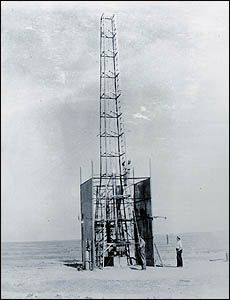