The first decade of flight after Kitty Hawk in many ways remains the most dramatic of all as brave men and women took to the air in shockingly fragile machines. By 1909 the first daring flights were made from the central area of Nassau County, then known as the Hempstead Plains. Because the flat, open landscape made a natural airfield, close to New York, the earliest aviators were drawn to the place. Thus aviation was first introduced to this area where it was to remain the focus of intense activity for the next 50 years. 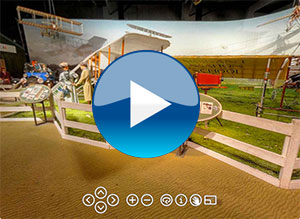