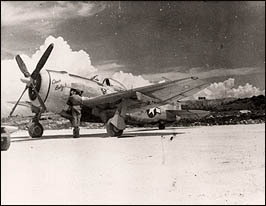 Without question, the P-47 was one of America's greatest fighters of World War Two. The aircraft was designed around the huge new R-2800 engine equipped with a turbo-supercharger to greatly increase high-altitude performance. Armed with eight .50 caliber machine guns, the P-47 carried more firepower than any other World War Two fighter and it was the largest and heaviest American single-seat fighter to see combat. The leading American aces in Europe flew P-47's exclusively. In addition to establishing an impressive record as a high-altitude escort fighter, the P-47 gained recognition as a low-level fighter-bomber because of its ability to carry a heavy load of bombs and rockets and to absorb battle damage and keep flying. The P-47 was widely and successfully used in both the European and Pacific theatres. 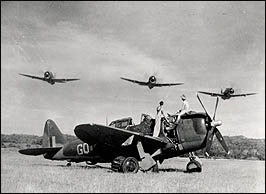