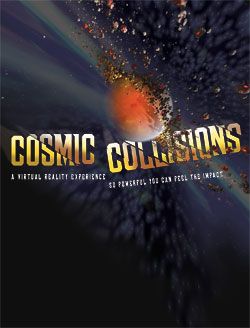 From subatomic particles to the largest galaxies, cosmic collisions are a universal force of nature. Creative and also destructive, dynamic and dazzling, collisions have resulted in many things we take for granted – the luminescent Moon, the Sun’s warmth and light, our changing seasons, waves washing up on a sandy shore, They’ve ended the Age of Dinosaurs and changed the very map of the cosmos, reforming galaxies and giving birth to new stars and new worlds. Cosmic Collisions, the third Space Show produced by the American Museum of Natural History, provides an unprecedented and extraordinary view of these events – both catastrophic and constructive – that have shaped out world and our universe.

Cosmic Collisions was developed by the American Museum of Natural History, New York, in collaboration with the Denver Museum of Nature & Science; GOTO, Inc., Tokyo, Japan; and the Shanghai Science and Technology Museum, China.

Cosmic Collisions was developed by the American Museum of Natural History with the major support and partnership of National Aeronautics and Space Administration, Science Missions Directorate, Heliophysics Division.

Jump to a Date

Explore the night sky with your favorite friends from Sesame Street in One World, One Sky: Big Bird's Adventure. Follow along with Big Bird, Elmo and their friend from China, Hu Hu Zhu, as they take you on a journey of discovery to learn about the Big Dipper, the North Star, the Sun and the Moon. Running time, 25 minutes.

One World, One Sky: Big Bird's Adventure was created as part of a global partnership between the Adler Planetarium; Sesame Workshop, the nonprofit educational organization behind Sesame Street; the Beijing Planetarium; and the Liberty Science Center (Jersey City, NJ).

First, live educators will talk about what is happening in astronomy right now in Space News then get ready for Asteroid: Mission Extreme!

This movie takes audiences on an epic journey to discover the possibilities that asteroids present for space travel. Using stunning visuals and state-of-the-art computer graphics, the film presents the fascinating idea, based on real science, that asteroids could be used as stepping stones to other worlds, veritable “way stations” in space enabling us to cross the entire solar system.

As with any venture in outer space, the challenges involved with making this idea a reality are enormous; however, a mission this extreme could ultimately lead us to learn how to protect our planet and how to successfully inhabit other worlds.

Explore what it would take for astronauts to reach an asteroid and then tame it for our use, as well as how such an extraordinary adventure could benefit humankind, in Asteroid: Mission Extreme. 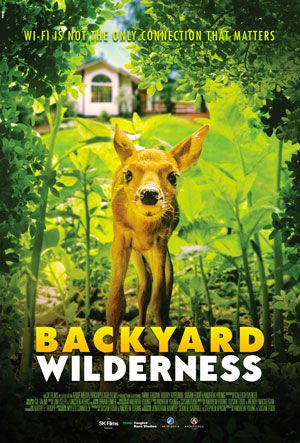 Backyard Wilderness will surprise and entertain viewers with the unexpected wonders of nature that are right under our noses—in our own backyards. 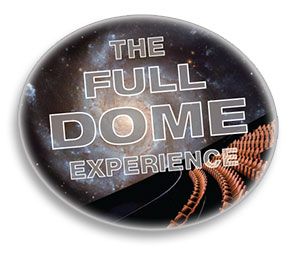 Current Night Sky
Long before television, GPS and street lights, there were the stars of the night sky. Visitors will travel through the seasonal night sky to learn about constellations, hear mythical stories and observe the magnificent Long Island sky. 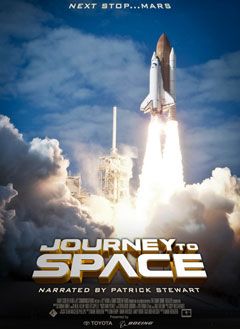 “We began as wanderers, and are wanderers still”
~ Carl Sagan

In the past half century, humans have punched through the stratosphere, walked on the moon, and lived continuously in orbit. In the coming decades, our unquenchable curiosity will take our species beyond the cradle of Earth to touch the face of another world. Strap in for the next giant leap. Next stop … Mars! Narrated by Patrick Stewart.

NASA’s next era will be its greatest yet. That is the clear “roadmap” painted by Journey To Space. The film absolutely annihilates the perception that the space program died with the end of the Space Shuttle Program by showcasing the exciting plans NASA and the space community are working on, and the challenges they must overcome to carry out audacious missions such as landing astronauts on Mars and capturing asteroids.

By using extensive interviews with astronauts Chris Ferguson (Commander of the final shuttle mission) and Serena Aunon (a new astronaut chosen for future flights), as well as a brilliant narration by film and television legend Sir Patrick Stewart, Journey To Space gives a sweeping overview of past space accomplishments, current activities and future plans.

Journey To Space puts into historical context the magnificent contributions made by the Space Shuttle program and its intrepid space pioneers. It uses the most spectacular space footage – including unique views of Earth and operations in space – such as deploying and repairing the Hubble Space Telescope. It then goes on to show how the Shuttle launched and assembled the International Space Station (ISS). Together, these programs have taught us how to live, build and conduct science in space. The ISS will continue operating in space until 2024, and the film shows how it is building a foundation for the next giant leaps into space.

The film concludes with a fascinating, realistic scenario of how astronauts will actually get to Mars, live there for long duration, and then return home after a two-and-a-half-year mission. This includes the new icons of the next chapter of space exploration:

Orion is NASA’s first spacecraft designed to carry humans on long-duration deep space exploration missions throughout the solar system.
Olympus, an inflatable transportation habitat, is an early concept 45- or 50-feet diameter module that would provide astronauts the work area and living space necessary for long-duration missions. Smaller versions have already flown in space, and a full-scale version is shown undergoing ground testing.

The Space Launch System (SLS), a new giant rocket, will carry spacecraft, Mars landers and ascent vehicles to place astronauts on the surface of Mars. SLS will generate over nine million pounds of thrust and will launch hardware into orbit equivalent to the weight of 22 elephants.
Journey to Space will both inspire a new generation of young people to dream of new horizons in space, and engender a new appreciation for the accomplishments of the Space Shuttle Program among an older generation who came to take it for granted. 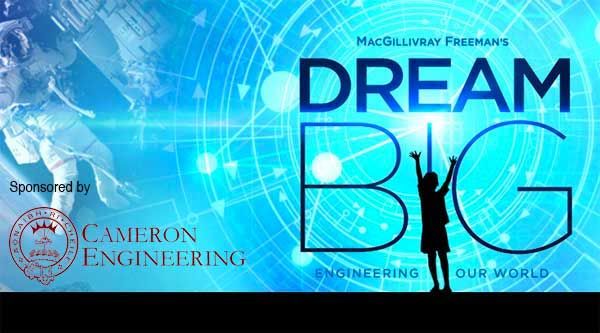 A HEARTFELT STORY OF HUMAN INGENUITY

Narrated by Academy Award® winner Jeff Bridges, Dream Big: Engineering Our World is a first of its kind film for giant screen theatres that will transform how we think about engineering. From the Great Wall of China and the world’s tallest buildings, to underwater robots, solar cars and smart, sustainable cities, Dream Big celebrates the human ingenuity behind engineering marvels big and small, and reveals the heart that drives engineers to create better lives for people around the world.

“Sure to inspire your future innovators!”
—SCHOLASTIC TEACHER

Backyard Wilderness will surprise and entertain viewers with the unexpected wonders of nature that are right under our noses—in our own backyards.